Sunday's warm south winds brought six wind-starved windsurfers and one kiter out to Marysville.  The winds were lighter than expected, and up-and-down all afternoon, but the warm air temps this late in the season made for no complaints.  Chris L got there early and rigged two complete kits  -   and used them both.  The rest of us rigged everything from 4.5 - 7.0, and somehow made it all work. 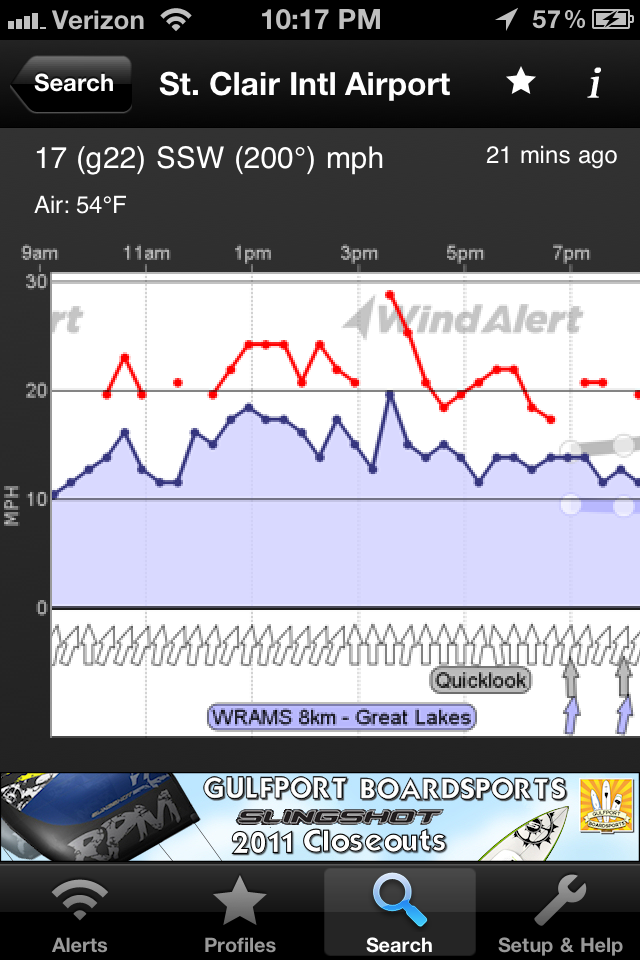 Millard made the call on Marysville, thinking that the cold water and warm air over the lakes would produce that "bubble" effect, which keeps the wind from getting down to the surface.  This was Jeannie's first time there, and only my second.  If you've never been there, the launch is just south of E. Huron Blvd on River Rd.  There's a grassy rigging area, and the water is shallow on both sides of the river.  Millard tells me that on a good 5.0 day, with the wind at about 190 degrees, there are nice swells.  I think it's worth the drive.  It's like our own mini-Gorge, with the current running opposite the wind.  Today it was pretty flat, but again, no complaints this time of year.

There are the occasional freighters, "lakers" and "salties", that make their way through the shipping channel, so you've got to keep your eyes open, again just like the Gorge.  There were only two during the whole afternoon.  The shipping season is also coming to an end as the lakes prepare to roll up their protective ice blankets. 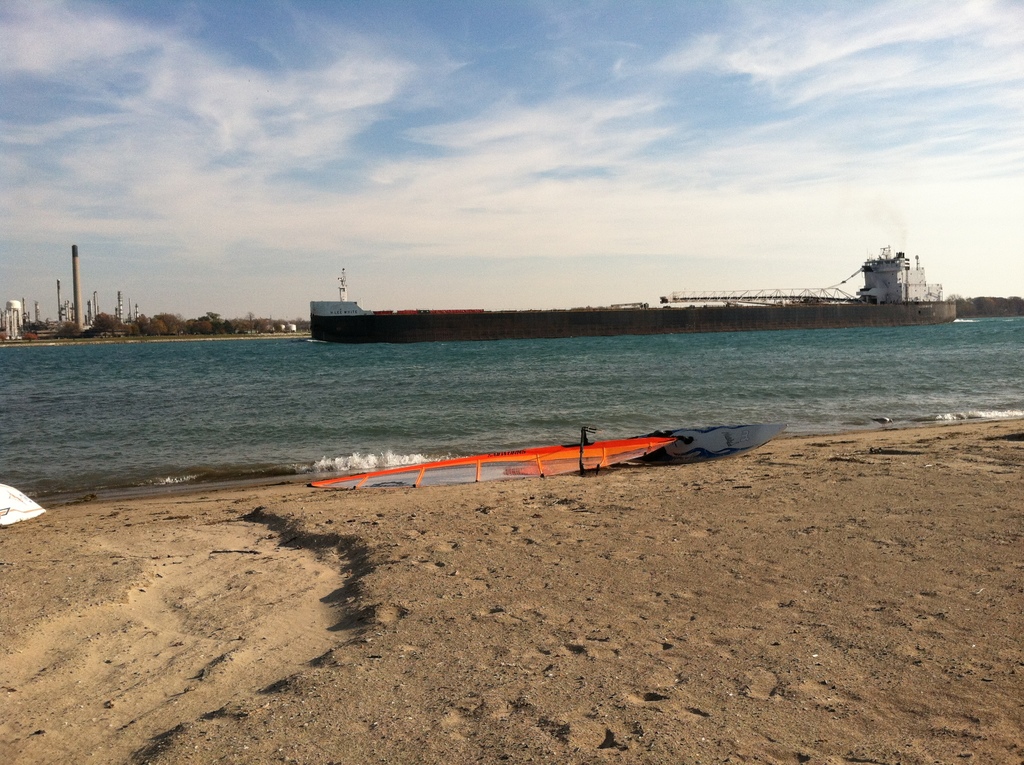 There's a chemical plant across the river on the Canadian side, which adds 'scenery' and even warms the water a bit (gotta look on the bright side).  At night, it's not so bad: 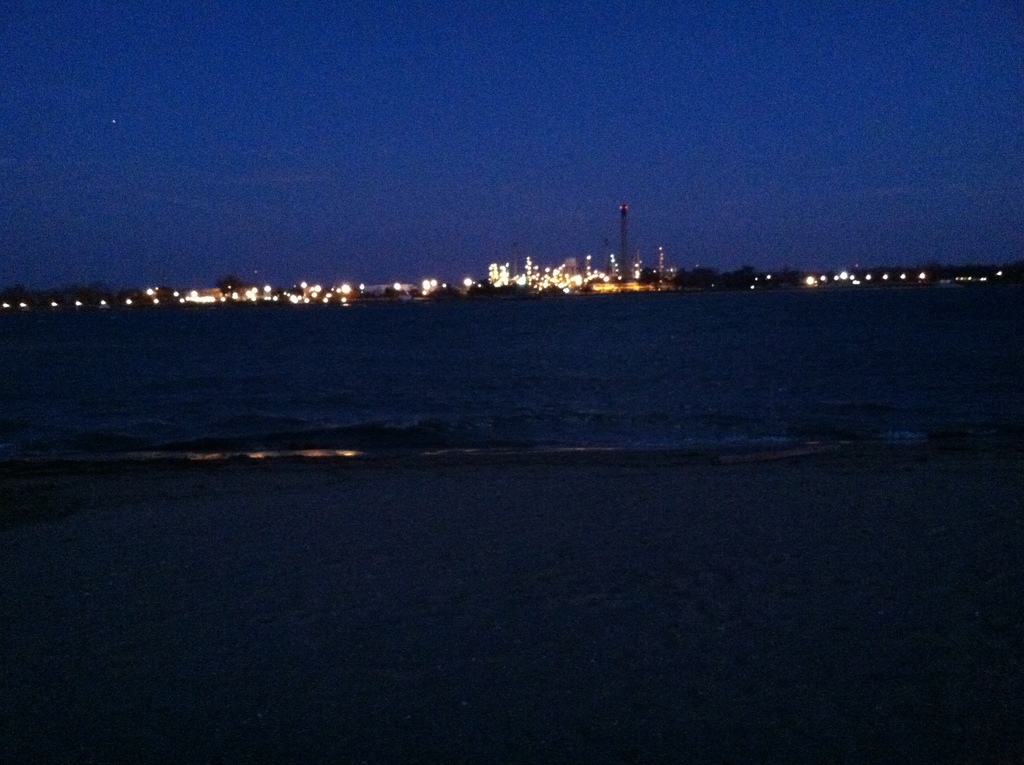 I've got no sailing pic's to show, but Millard might have some GoPro footage.  Chris may also post a session report.  I've got links to their blogs in the blog roll on the right side.

Jeannie came off the water last, and it was getting late, so we pulled away in the dark and hit the closest restaurant. The Junction Bouy was only just up the river, maybe a quarter mile.  The food was good, and the location was great.  We'll try it again when the weather is warmer and we can sit out on the deck, which looks out over the river.

Permalink Reply by Don Ferguson on November 7, 2011 at 2:06pm
I think we see you from our side of Peche Island, as you are sailing once in a while Dan. Do you sail at PP often??

Yes, but only weekdays if the direction cooperates and it is 6.6 conditions or better.  Most weekends I am up in Caseville (I sailed at Caseville County Park the weekend you visited with Brian and Jeannie).  PP is only a couple of blocks from my house so I often will sneak away from work if its blowing on a weekday and doesn't have to much W in the direction.

Permalink Reply by Don Ferguson on November 7, 2011 at 4:30pm
Nice!! You sound like me! I have sailed our side of the island on 7.5 but it tends to be gusty there. best direction for us is West South West to due West, I have in  a pinch (because of having limited time) Sailed there in some NorWesters as well but the back wash along the shoreline can be horrendous and stretches out quite far.

See you got out last night! Great!! Just wondering how it was the sensors seemed to be all over the place but of course after dark it just wailed here. Erie sensors had gusts up to 50mph. The rain didn't move off here till about 2 pm so not much time as I was thinking of going to Metro Beach to sail with Tom J but wasn't sure about the conditions I'll have to get some cell phone #'s that way we can be a bit more sure,

It was nice to get out but I have had better sessions.  Got to the park around 2:30 p.m. with wind averaging around 20 - 21 with gusts to 27 (that's the good part) and lulls to the mid-teens (that's the bad part).  Decided to go w/100 liter board and 5.8, which was probably the right call for me for the first hour. Then the wind gods decided they would have their way with me and kicked it up a notch or two or three.  I would have liked to have gone in and rigged something smaller but with daylight waning, I simply sailed/survived for another half hour before I waved the white flag to surrender.  By the time I got home at around 5:00 p.m it seemed like it was still building with some super strong gusts coming through.

Thanks for the honest report Dan. Been there done that! Seems most of my sessions have been either overpowered or underpowered this year, or just bad luck at times. At least you were on the water having fun for most of the time. In that direction was it mostly straight onshore? if so how is the voodoo chop from the breakwall backwash over there?

Yes, it was mostly onshore but not much breakwall backwash at PP.  Also, unlike Metro Beach, no weeds :-)