July Windsurfer International is out!

The July issue is hot off the presses. Check it out: Windsurfer International

Following on a couple of ideas from Don Ferguson on broken booms, I found these great articles, by Patrick Bergeron, on self-rescue:
http://www.river-rippers.net/modules.php?name=News&file=article&sid=50

And while it's hot and there's no wind, it's a good time to go through your gear, replace worn downhauls and rubber U-joints and get ready for the days when it decides to blow… Continue

For Ladies of Windsurfing Only!

For the few, the proud and the brave - women windsurfers, that is - there's a new website that you may find interesting: http://www.flowindsurfing.com/
The site even features a "hunk of the month".

Events in and around MI

I hope everyone got some this weekend! I've posted a few new race and demo events that are coming up in the next month. If anyone wants to report on these, let me know.

Lastly, Scott Haas, from MOWIND (see their link), is looking for people to report from race events on his site. Contact Scott if you're interested.

In case some of you are unfamiliar with Steve, he's a multiple US Windsurfing National Champion and a top ranked US sailor on the Formula Windsurfing World Tour. He is also raising awareness for clean water through a site called "Friends of the Water". When its not windy, Steve attempts to perform amazing feats of architectural design and visualization through sbdesign! (from Steve's blog).
Why am I bringing up Steve? Because he's… Continue

Since there's no wind action to post, I thought this was at least entertaining:


Saw this on Aaron's Blog: http://humancatapult.blogspot.com/
Anyone got a great Michigan wipeout to… Continue

Weekly windsurfing at Patterson Park will be in a new format this year. We've been invited to participate in the Grosse Pointe Sailing Club Tuesday night race series. We'll
meet and launch at Patterson, by 6:00 pm at the latest, and sail up
to the starting line at Windmill Point.

Paterson Park is on Lake St Clair, just north of Detroit. Map is at…

This from Nathaniel S.:

And we've received the following about a regatta in Toledo:

As you all now by now the Toledo Windsurfing Regatta has been cancelled, but the local sailing club, …

Wind sensor is up and running at Rondeau Bay as of 7pm tonight. yahooo!!!

Surf news from around the world . . well, at least the US and Canada

Don, one of our new members, send me some info about their local windsurfing blog, so check it out.
www.rondeauwindsurfingteam.blogspot.com
It's got some nice links to launches (at the top) and some video and picture links on the right side,and Rondeau Bay is not too far. Don says, regarding Rondeau Bay, that "It is a venturi in South Westerly winds and it will be much windier there than anywhere else I know of… Continue

Thought I'd point out that we have at least one celebrity member among us. Andy McKinney is the owner of WIND-NC, and the "Lost-in-Hatteras" blogger, who now posts through Windsurfing Magazine. Andy is a great guy and did a short video interview for us while the Michigan group was down in Hatteras a few weeks ago. Some of you probably already know… Continue

The eleven of us who stayed in Rodanthe last week all agree:

The warm, shallow water (sound-side) and the steady winds make Hatteras a special place. We had great sailing days, perfect accommodations, and great food and camaraderie. There were more…

Day five started out as a no-wind day, so many of the guys went fishing or cruising the windsurf shops. I think a few of the shops made some money today. In the afternoon, the wind defied all forecasts and came up big.

We were all on 4.0- 5.5's all afternoon. The wind was steady as a rock, despite coming up unexpectedly. Really a great day. Fresh caught fish and pasta for dinner,… 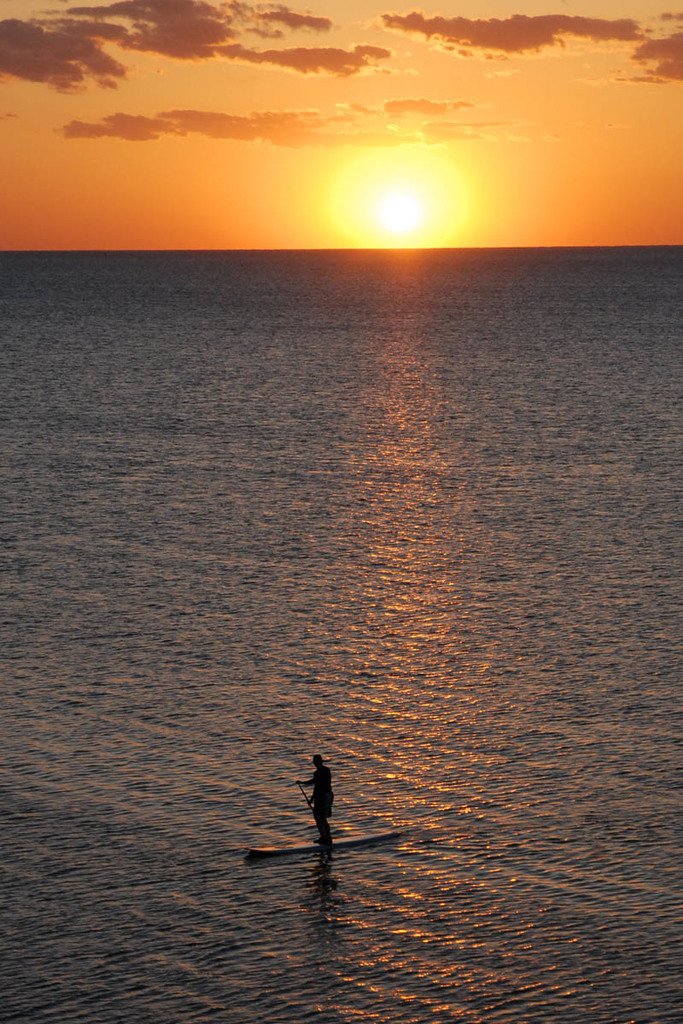 The highlight was the pasta dinner, graciously provided by Karen. Great pasta, bread, wine and salad. For me, the best meal that I've ever had in Hatteras.… 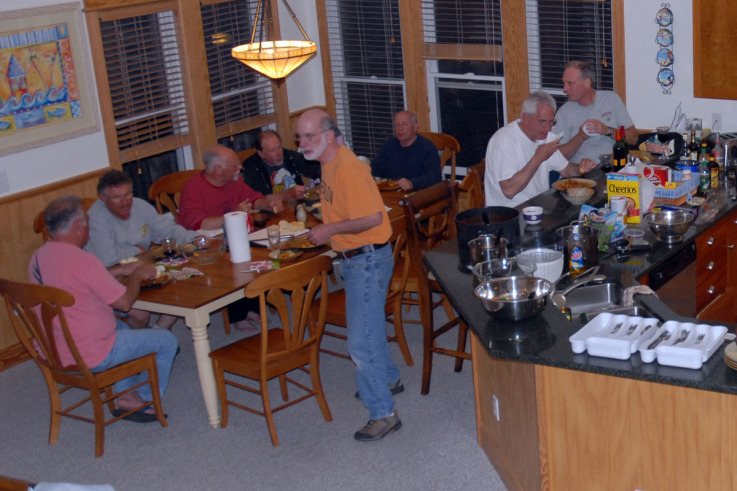 Well, in spite of all the predictions, the wind did come up on Tuesday afternoon. We had a break from the 4.0 - 5.0 conditions of the past two days, and got to use 5.5 - 6.5 sails. No one was predicting the wind, but it came up for about 3 hours or so in the afternoon. Another great day in Hatteras.

Check out the post-sess jam session on the video page.…

Well, it was another day in paradise - if you had a 4.0 or smaller:

Studs and Geezers in Hatteras!

The studs, geezers and studly geezers from MI were rewarded with prime Hatteras conditions all day long today. Guys were on 4.0-5.0's in the moring, and then even some 3-somethings in the afternoon.

Nothing left at the end of a good day:… 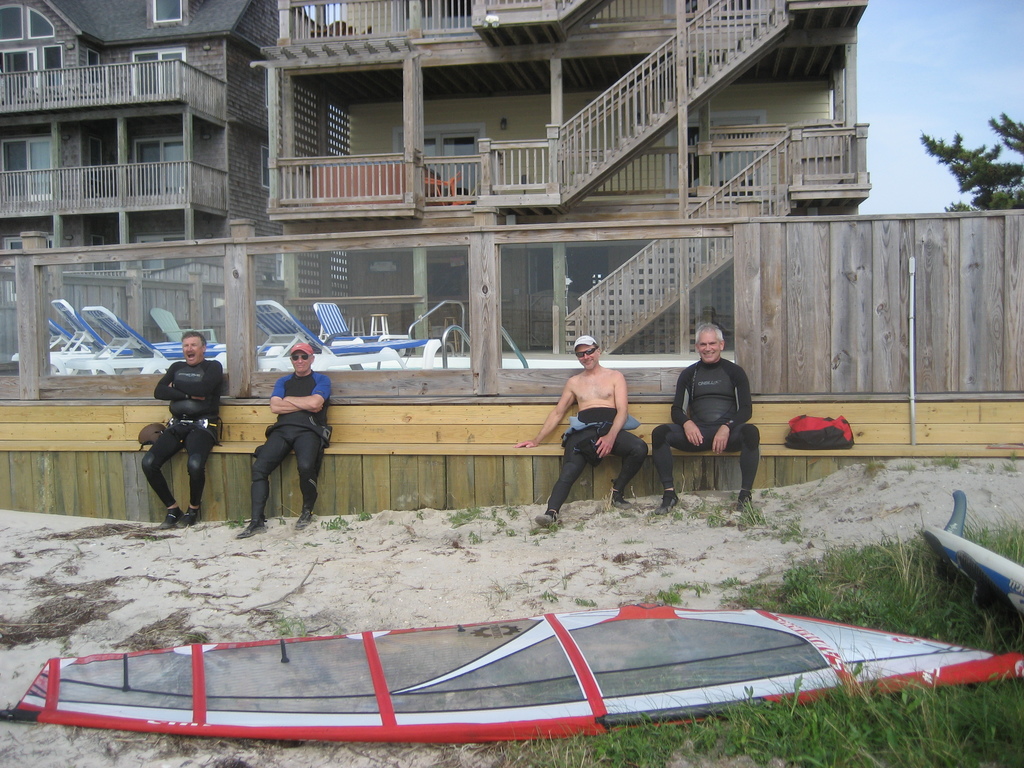 Hey Everyone,
Please take a look at Tom's post in the Wind Talk forum. He's looking for help to keep the Lexington Wind Talker going. Maybe you know a small business who would like to help? Or maybe you can help yourself?