Having some unused vacation days and lingering desire to somehow get sailing again. I decided to go on a quest to camp where the sailing is good, buy a new or used windsurfer, sail it and generally have a sailing vacation that's been missing from my life.

Why buy? My windsurfing gear is about 20 years old. I got what I could afford at the time. As such that gear is old, heavy and slow. It served me well for years and years. I think it is well overdo to treat myself to a new rig. After all I work hard all year long, it's my cake day and there's a whole bunch of justifications I could make, but that's not the point.

My first thought was to head to Hatteras, rent some gear, try it before I buy it kind of thing. There was a great shop called Wind NC which had impressed me when I vacationed there in the past. Unfortunately, Wind NC moved from Hatteras and is now a online retailer, which is not the buying experience I was looking for. With my all time favorite shop off the table, I decided to investigate shops local to Michigan before exploring more OBX shops. I always intended to invest more time and effort into enjoying the sport in Michigan as opposed to heading south.

While my search revealed a limited set of options viable shops, I was nevertheless very impressed by Sailsport Marine in Traverse City. Scott was super helpful over email and by phone. The shop is dedicated to all kinds of smaller sailing craft and the selection of windsurfing gear was pretty good!

Having found my shop, I then had to figure out where to camp. I decided to try Empire Township  Campsite, which seemed like a good location. The place was great, and I can highly recommend it. The picture below shows my tent and hammock among the trees. I really dig the camping thing, and I think it's going to open up a whole bunch of cool sailing locations. ETC was really really nice. It was pleasant enough to hang there all day Saturday when the wind was MIA. I had time to read a book and just relax in the hammock. 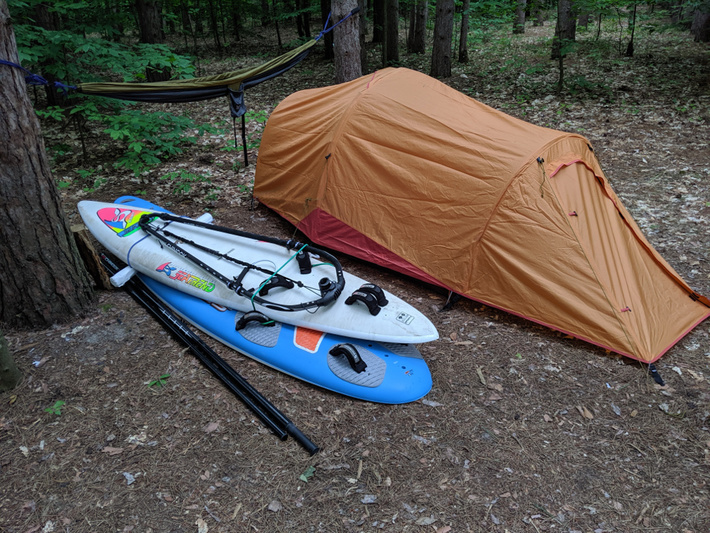 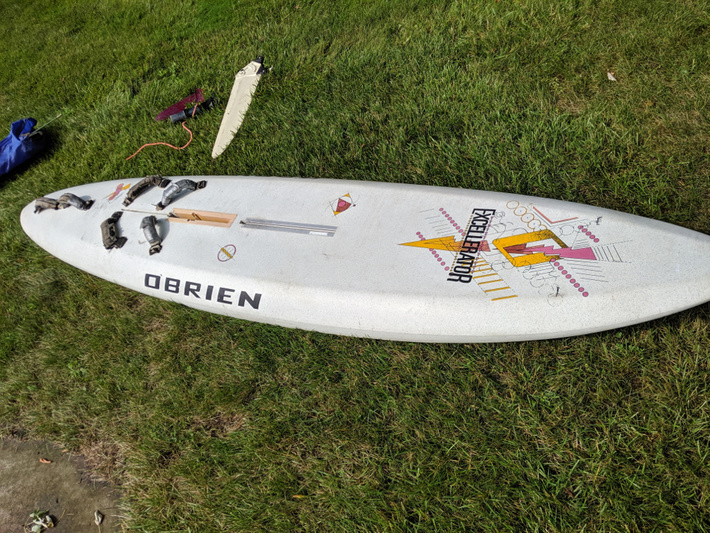 What to do with the old board? Maybe I could give it away. Or maybe a niece or nephew would want to try the sport one day and it could be nice to have it around as it is a completely functional rig. Who knows...

I had been to Traverse City a few times, but never really explored the regions sailing potential. So I wanted to try a few spots. The launch sites on my radar where

As you can see my radar was not very precise, and I have some willingness to drive for sailing conditions. Luckily, I did not need to leave TC at all. My first day was a light wind day 10 knots or so launching from Greilickville Harbor Park. It is basically an amazing launch site. Public beach access (check), parking close beach (check), big clean bathrooms (check) and convenient location. The sandy beach belied some danger below the surface, and my bare-feet found some big rocks near shore. They were not sharp, so I ended with a little bruise but nothing to worry over. Across the bay there was a Hobie-Cat race going. I got close enough to eyeball a Hobie 16. I could have crossed the bay had it not been for the race. Instead I tacked back to the beach. It was the kind of light and steady day that encouraged me to sail at least two miles. Never a particularly exciting moment, but it was nice to regain some confidence. It had been a few years since i last attempted windsurfing at all.

There was no wind Saturday as mentioned, but Sunday was very windy. First I headed to Betsie Point, and then decided to head south a bit to Elberta. It was lots of fun. Being on my own sailing in Lake Michigan for the first time, I erred on the side of caution. It had been some time since I last windsurfed, and I was determined not to find any trouble. As such I kept it close to shore.There was weather front rolling in from the West, and zero boaters. The wind was blowing onshore, and that gave me a small piece of mind.

There was enough wind that I maybe would have been better off with a smaller sail. 7.7 was bit much to handle at times. I certainly needed the practice. It was fun to beach start and see the board plane from time to time. I was more interested in staying under complete control and heading upwind than to go for speed and attempt jibes. But the new board was easy to sail and occasionally I found the board planing or at least near planing. Playing safe all day was fine, but rather wish I attempted at least one jibe. But darn there was just nobody around. If anything happened it would be up to me to get back to shore. So I wasn't going to take any (additional) unnecessary risks.

Then the weather came just as I got it derigged and loaded on my vehicle.

I'm def going to be hitting up this area again. Hopefully soon. I have a shorty wet suit, which I hope is sufficient for windsurfing in Michigan in the Fall.

I love hearing others' adventures WS around Michigan.

Hey Cris,  I am game for camping/windsurfing trips.  I have wanted to sail and camp at Tawas State Park and Bear lake just north of Ludington.  Up for other places as well.  You got the perfect setup for light Michigan summers.  I sail a Bic Techno 293d and love it.  I am a teacher so I am back to school soon, but sail evenings and weekends through October.  Let me know if you want to plan a weekend trip somewhere.

Hey Cris I enjoyed that.

WSing in Michigan is definitely exploration with a lot of luck to hit the right spot on the right days.  Petoskey area is a bit further than TC but with similar sailing, maybe less crowded beaches .  Crooked lake is nearby, its tiny Oden park launch I think has to be the best chance for afternoon 14-16 mph wind in Michigan if the area forecast is even just  8 from SW-W. Comfortable sailing and shallow water jibes or beach/water starts  on each end of a reach to the island and back.

I think I am one of only 2 or 3 regular local sailing joes from AA area. The problem being how much distance and forecast interpreting it takes to get to actual wind that is not a gusty pothole --or on weekends a boatwake swamp.  So if you are interested, here's my 2 cents for someone getting back in.  Cass lake if it is a real SW with 10 or better.  Metro beach on St  Clair is great fun if it is a 15 or better SE through SW and you can cope with some down time in choppy swell.   Because often it is only blowing 12 until just before dark, and meanwhile the whitecaps are just shore bounceback jerking your mind and its not quite worth the drive.  But these 2 spots usually still have other WSrs and not just kiters, and I have to say, either exploring or waiting on shore sharing stories is half of where it is at in Michigan.

Good luck, and look forward to seeing you!

Steve (operating out of an overstuffed gray focus)

Thanks for sharing, Cris.

I was unaware that there were any windsurfing shops left in Michigan.  I am pleased to hear about Sailsport.

By the way, Rand Bass is working to connect West Michigan windsurfers.  TC may be a little further north than Randy contemplated.  Even so, you might want to reach out to Randy to avoid sailing with just nobody around.

Best of luck in your renewed adventure.