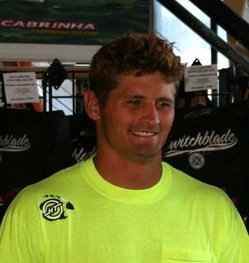 strolled over to the Grand Rapids area to talk to Mark Boersma, USA 17, about some of his accomplishments - and to get a few tips as well.  Even at a young age, Mark was a racer.  In 1998, at the age of 10 yrs., Mark was the youngest person to compete in the Windsurfing Nationals – and he tied for 9th place!  This is a guy we gotta meet!

Will Splashtack (WS):  Mark, I know we’re near the end of the semester, so thanks so much for taking the time from your studies to talk to Michigan Windsurfing.  Before we get to your accomplishments, let’s start with where you grew up and how and where you first learned to windsurf.

Mark Boersma:  I grew up in Grand Haven.  My dad got me started windsurfing.  When I was two years old, my dad put a baby boom on the mast, under his boom, so that I could hold on.  We would sail around together on Spring Lake, Lake Macatawa and Muskegon Lake.  When I was three, my dad took me onto Bear Lake and taught me to windsurf by myself. Of course, my mom used to windsurf and my sister windsurfs too! WS:  So, if you started at age 3, how long was it before you were sailing independently?  How 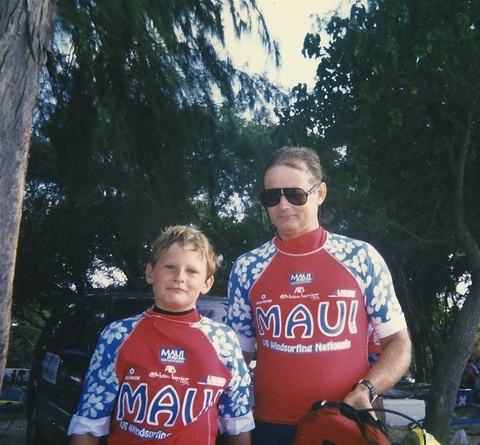 long did it take you to learn to complete a basic tack or jibe?

Mark: I was sailing independently by the age of 5 and I had mastered all points of basic sailing jibes, tacks, duck jibes, and sailing skeg first by the age of 6. I learned to waterstart when I was 9 years old.

WS:  How about racing?  If you were already competing in US Nationals at age 10, how did you get to that ability level?

Mark:  My first race was in Michigan at Higgins Lake when I was 9 - I think?  It was a long time ago.  I was able to travel because my dad was a teacher and he had summers off.  It also helped that my dad would only go on vacations if they had a good windsurfing spot.

Everywhere I have windsurfed I have raced except for some places in MI.  I have been teaching windsurfing on Maui for Hawaiian sailboarding techniques for 8 years.  I have been racing for 11yrs in the Maui Race Series. 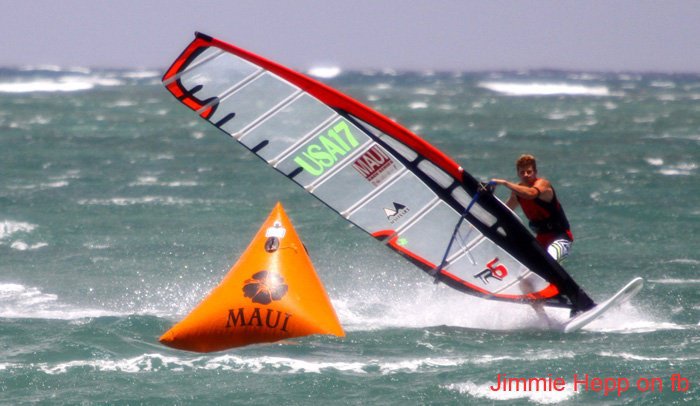 WS:  Did you work with the US Junior Team?  Who were your influences there?

Mark: My mom took over the USWA youth program in 2002 and was the developer of the US junior team, so I was on the team from the beginning until I was too old to compete for them.  Our coach, Charles Ivey, was very influential in my racing career and I owe a lot of my success to his tutoring.

WS:  I’ll post a list of your racing results for the readers (that would be my mom and your girlfriend) at the end of this interview.  How about just windsurfing for fun?  Other than racing, what do you like to do?

Mark:  I really enjoy wave sailing on Maui, if and when there are waves in the summer.  However most of the time I’m training on my race gear, practicing jibes fast tacks and speed runs.  I find all of that windsurfing is fun though … Oh, and nothing beats being over-powered on slalom gear and hitting some steep ramps and flying 30 or so feet in the air!  I just have to be real carful on the landing!  LOL!

WS:  Sounds like you’ve sailed all over the world, including at some great beaches here in Michigan.  Where are some of your favorite places to sail?

My favorite? … probably Maui due to the consistency of the winds.  But if Crystal Lake had winds that consistent, I would choose it as my favorite.

WS:  Mark, if you weren’t windsurfing, what would you be doing?

Mark:  When I’m not windsurfing I really enjoy racing cars. My dad, sister, uncle and I compete in the races series called the 24 Hours of Lemons, where we race a 1984 Mazda RX7 in some endurance races.  I also like to race our Honda S2000 in autocrosses around the area.  I really like going fast, so racing cars is a great substitute activity when there is no wind.

WS:  Mark, right now you’re a Senior at Grand Valley State University studying to be a Special Education Teacher.  What are your plans after graduation?

Mark:  I’d like continue to race in the pro division in the Maui Race Series, and to do some of PWA tour the summer after next.  I’ll also try to do every local event that I can get to in the Midwest.  It would be a dream of mine to try out for the 2016 Olympics.  It’s very costly to train and travel to compete in the events.  I wanted to try out for the 2012 Olympics but I could not afford to do the two trial events on opposite ends of the world.  And, of course, I’d like to be an elementary resource room teacher around western Michigan.

<Note:  Mark did this interview before the ISAF announcement.>

WS:  Good luck to you Mark.  As soon as you’re a certified ‘special’ education teacher, I’ll come by for some windsurfing lessons.

Mark:  Anytime Brian! I am happy to work/sail with any MI windsurfers! That goes for anybody on the site, if you see me on the beach don’t hesitate to pick my brain on rigging or sailing info.

Here are some of Mark’s accomplishments:

Comment by Brian on May 26, 2012 at 7:23pm
From Glendon Gardner :
Great interview, Will!
I was there at Higgins Lake when Mark entered his first race.  I was a novice 40 year old sailing against this 9 year old.  I beat him the first race, but that was it.  With some coaching from his dad, he went on to win the novice division that year.  Mark has returned to that humble regatta many years since even though no one there can give him any competition any more.  He's always completely enthusiastic, clearly is still having a great time, teaches the rest of us, and usually sails without his shirt on, to give the ladies helping out on the committee boat a thrill. (I have that last bit on good authority from the dirty "old" ladies on the committee boat).
The Higgins Lake Regatta crew wish Mark and all the Boersmas more great success in the windsurfing world.
Glen Gardner (Prodigy sail#MIG)